The R4CRprogram was implemented by Association of Dutch Municipalities VNG International and funded by the World Bank Trust Fund for St. Maarten, created to provide assistance to the island after the devastating Hurricane Irma in2017.

(R4CR)projects and candidates, among which was Dow’s Musical Foundation (DMF).

The project aims at strengthening the capacity of civil society organizations in St. Maarten in their reconstruction and rehabilitation efforts after the hurricane.

On Thursday, May 20, State Secretary Knops and his delegation stopped by DMF, which is a candidate applicant for R4CR’s round two.

Children of different levels in steelpan education and from various schools, including Sr. Borgia and Sr. Magda Schools, Methodist Agogic Centre (MAC) Comprehensive Secondary Education (CSE), St. Maarten Academy and Milton Peters College, performed for the visitors on their pans, as they were welcomed by director Isidore “The Mighty Dow” York and DMF board members.

Knops, together with Trust Fund Steering Committee member Frans Weekers, Dutch Representative Chris Johnson and Director Kingdom Relations Saskia de Reuver, had a chance to try their hands at the Caribbean musical instruments and get some rhythm as they received and introductory class.

“I think they enjoyed it immensely. It was a highlight of the visit,” York said.

“If you play sports, you stay healthy and strong and if you play music, you become intelligent,” Knops said during his visit.

“I am happy the delegation stopped by to see how hard we work and to see where we want to go,” said York. “I would like to thank the schools for allowing the students to participate, and to all DMF students, members and teachers a big thank you for your support and involvement. This displays how essential the extra classes are and it proved that we were actually already engaged and prepared for this great presentation by all participating students.”

York said that DMF is planning on creating a music academy and giving musical classes at the Pointe Blanche prison, Miss Lalie Youth Care and Rehabilitation Centre, and in two public primary schools, Genevieve de Weever School and Oranjeschool, which were chosen due to their proximity to DMF’s headquarters in the Festival Village.

State Secretary Knops also visited the multi-purpose recreational center, a project of the Catholic School Board SKOS in collaboration with the Middle Region Community Project, for which R4CR provided the infrastructure for a playground.

Pupils of Sr. Marie Laurence School, together with their teachers, greeted the delegation while singing their school song and having some fun at the newly constructed recreational grounds. Present were Director of the school board Jessie Aventurin- Hodge and SKOS Project Manager Tanja Frederiks- Vliegen. 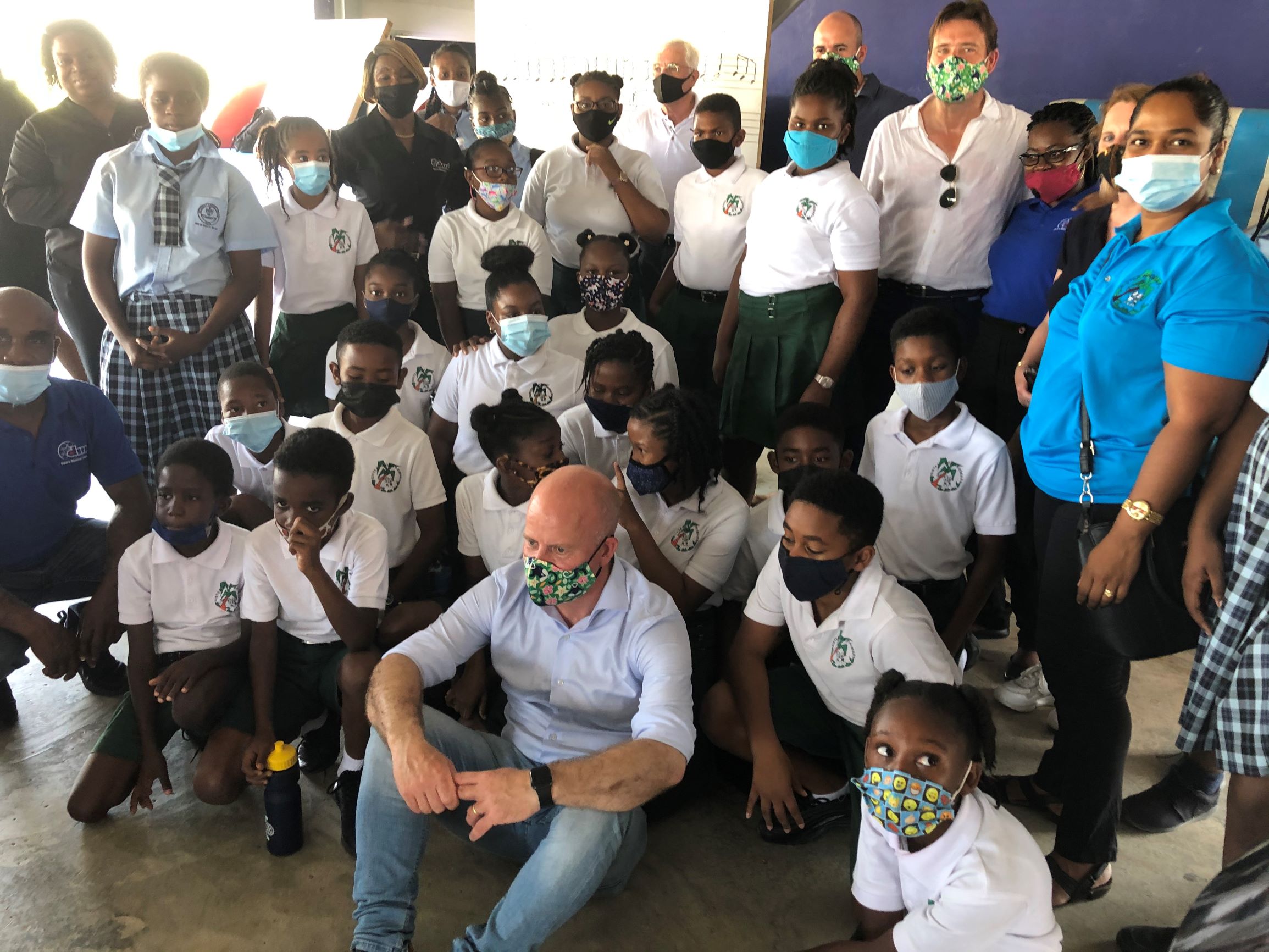 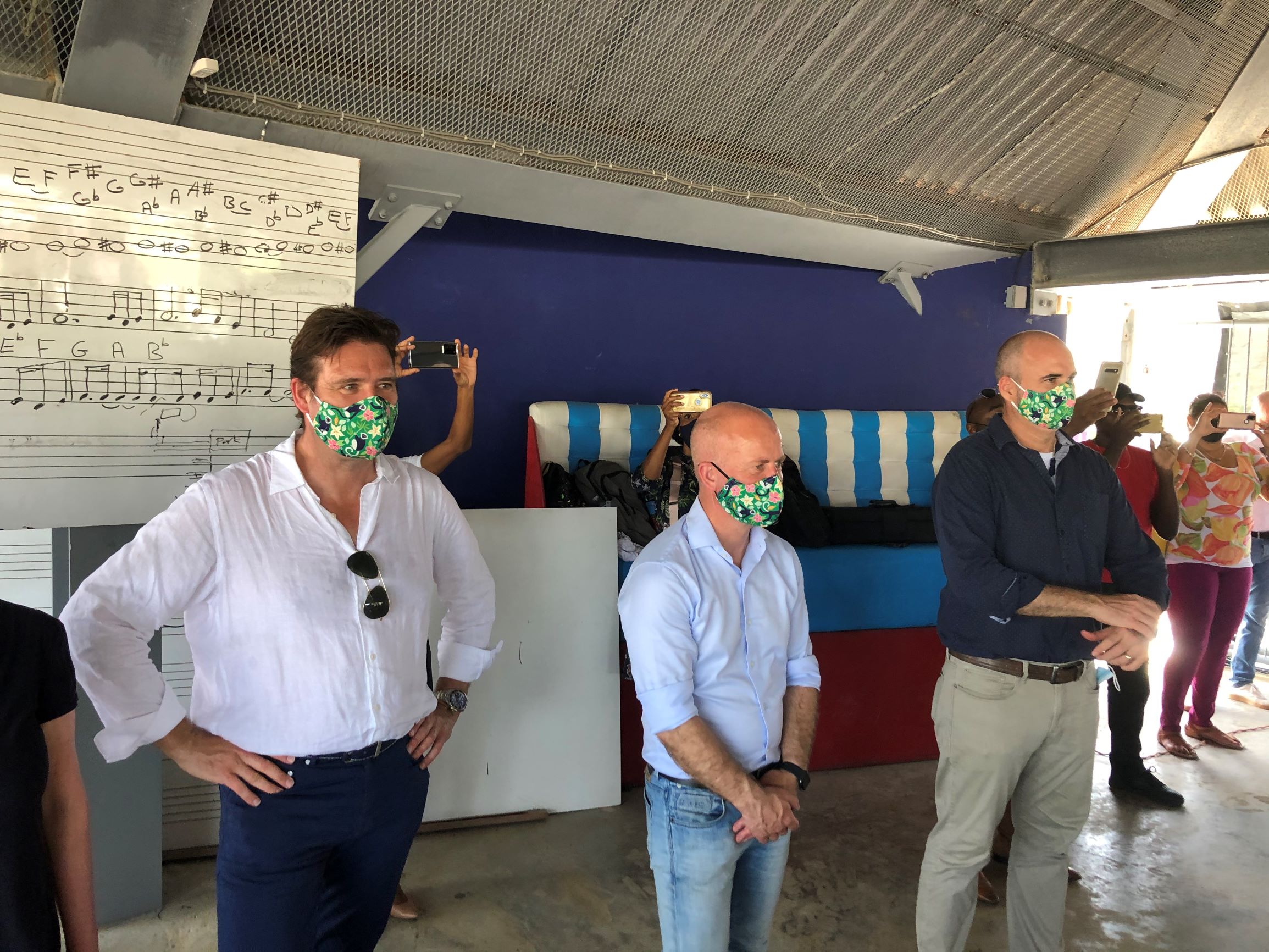 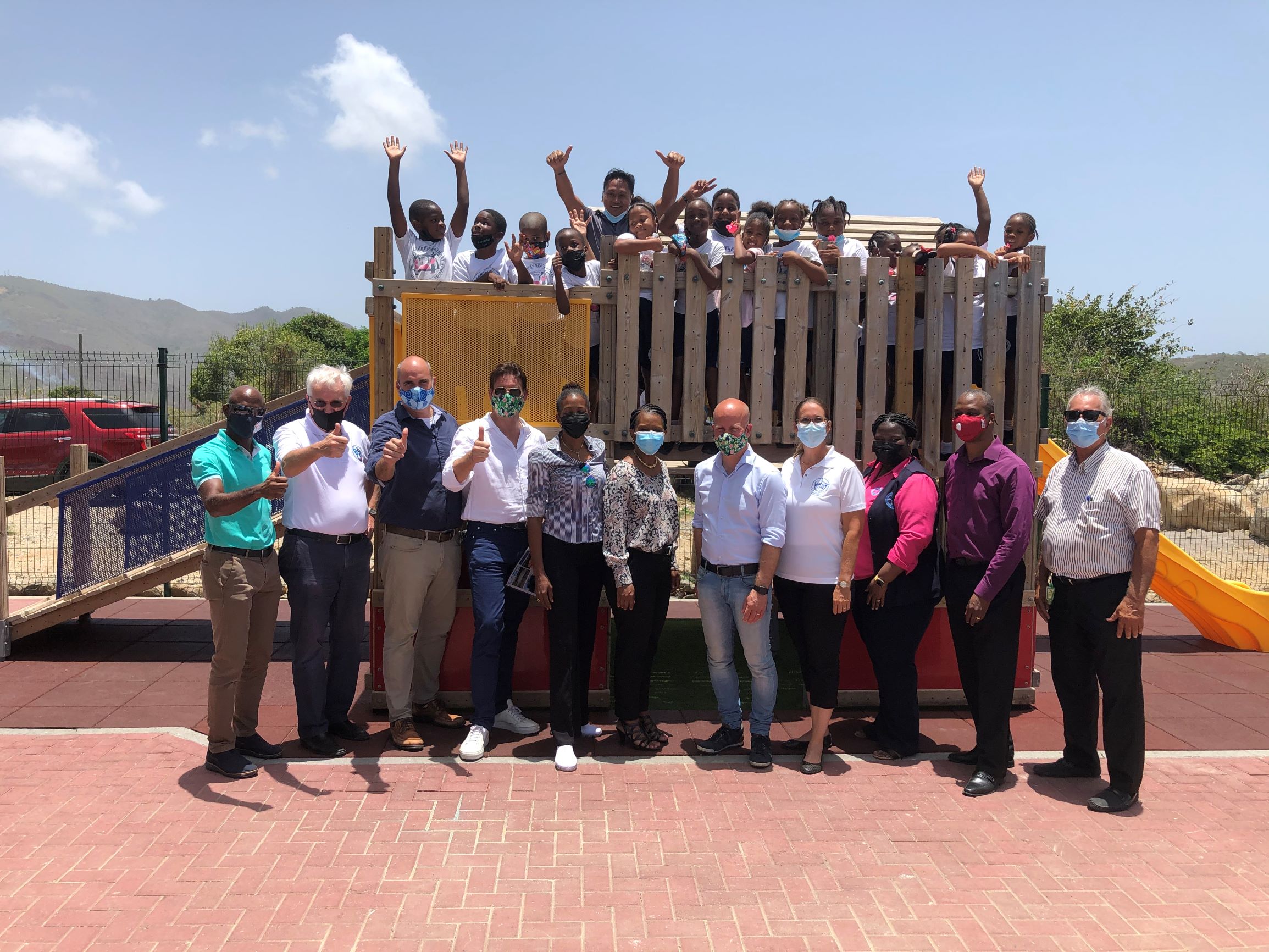